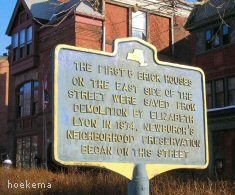 In 1999, Newburgh's waterfront consisted largely of broken slabs of concrete with grass growing between them. Today, the waterfront is a bustling destination, featuring a half-dozen restaurants and other businesses, drawing thousands of customers every weekend.

Despite the decline in the city's economic fortunes, a few activists and boosters worked to preserve the city's unique assets and restore its fortunes. In the 1970s, volunteers catalogued over 4000 historic buildings in the East End, which was declared a National Historic District in 1973 and enlarged in 1985. The Vaux-designed City Club on Grand Street and five brick Victorian houses on Montgomery Street were narrowly saved from the wrecking ball, effecting the end of wholesale neighborhood demolition. In 1998 the city received a Save America's Treasures grant for the Dutch Reformed Church, which was declared a National Historic Landmark in 2001.

Neighborhood associations have formed in recent years, and block parties are popular. Habitat for Humanity and their partner families have rebuilt 18 houses, with five more every year. The local hospital and community college have announced expansion plans, and new businesses are starting to relocate here. It seems our small city has turned a corner.