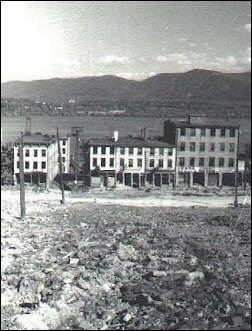 The biggest change to the central city was the move of the city "gate" from the Hudson to the highway. The bridge brought cars to a different Newburgh neighborhood than the ferry did - indeed it brought visitors to the town and not the city of Newburgh. These blows to successful urban commerce hit at a period of other change - the upward mobility of the first college generation, who didn't want to live upstairs and work 60 to 70 hours in the family store.

There was no great new wave of immigration at that time, and no one picked up the neglected businesses with new imagination. The city languished and got shabby. Empty stores were seen by city officials as eyesores and an emblem of failure. With copious federal funding, the local Urban Renewal agency razed dozens of blocks of the city to make room for something new, although what that "new thing" would be was never agreed upon.