A Local Waterfront Revitalization Program consists of a planning document prepared by a community, and the program established to implement the plan. An LWRP may be comprehensive and address all issues that affect a community's entire waterfront, or it may address the most critical issues facing a significant portion of its waterfront.

Please note that the 2017 LWRP (PDF) has been locally adopted as of July 10, 2017. It is still being reviewed by the New York State (NYS) Department of State (DOS), however, DOS considers this a "substantially complete draft," for matters of Coastal Consistency review.

The Waterfront Revitalization of Coastal Areas and Inland Waterways Act offers local governments the opportunity to participate in the State's Coastal Management Program (CMP) on a voluntary basis by preparing and adopting a Local Waterfront Revitalization Program (LWRP), providing more detailed implementation of the State's CMP through use of such existing broad powers as zoning and site plan review. When an LWRP is approved by the New York State Secretary of State, State agency actions are required to be consistent with the approved LWRP to the maximum extent practicable. When the federal government concurs with the incorporation of an LWRP into the CMP, federal agency actions must be consistent with the approved addition to the CMP.

Title 19 of NYCRR Part 600, 601, 602, and 603 provide the rules and regulations that implement each of the provisions of the Waterfront Revitalization of Coastal Areas and Inland Waterways Act including but not limited to the required content of an LWRP, the processes of review and approval of an LWRP, and LWRP amendments. 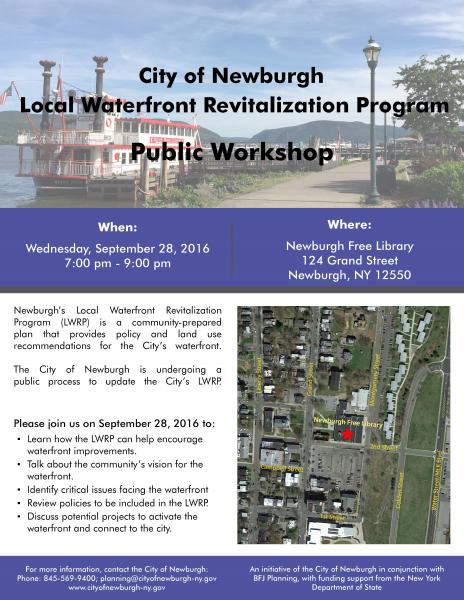