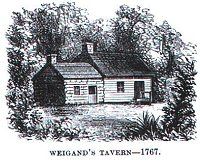 By 1750, Newburgh had expanded to nine streets - four parallel to the river and five heading west from the shore. Mills were operating along the creeks, farms were productive, and there were two docks on the Hudson: one public, at the north end of town, the other private, at the south end, at the foot of the Hasbrouck farm. A ferry had begun carrying passengers on daily trips to the other shore, replacing the former practice of hiring a private boatman as needed. New lumber mills fed the growth of ship, home and commercial building.

The great American melting pot began to simmer, as German Palatines were joined by Dutch, English, Scots and a few Africans working as free, indentured or slave hands on the larger farms in the area.

A new map was made in 1752, and a new royal patent from England officially accepted the name Parish of Newburgh ("New town"), named by Cadwallader Colden for the Newborough of his native Scotland. Captain Jonathan Hasbrouck became the first precinct supervisor of a locally formed governance structure.