Background of the Project 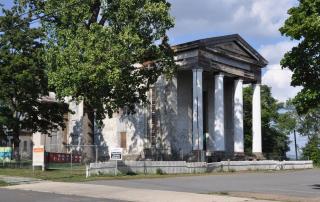 On November 25, 2016, the City of Newburgh released a request for developer proposals for an area of the City Center on the downtown hillside overlooking the Hudson River, as a focus for redevelopment. The area defined for redevelopment includes two architecturally significant buildings - the 1835 Alexander Jackson Davis designed Dutch Reformed Church (DRC) and the Andrew Jackson Downing designed City Club. A 1.8-acre parcel of Urban Renewal land was included for the purposes of providing an income-generating project to support the preservation and restoration of the City Club and the DRC and to ensure public use of the DRC. Proposals were due by February 1, 2017. Press coverage was disseminated and widespread including articles in all of the local papers of record, and in regional and state-wide preservation publications; City Council was consulted; and a distinguished review team, including representatives from the Preservation League of New York State (the League), the NYS Office of Parks and Historic Preservation (SHPO), architects and planners, the Newburgh IDA and professional staff was assembled. Three very different complete, and very competent applications were received. Each was collaborative including the lead developer, an architectural firm, and some aspects of community development.

Following this second round of interviews, the review team hosted the third conversation with Alembic Community Development, an experienced community developer, who had teamed with three organizations with a long commitment to inclusive revitalization initiates. The committee chose this team not only because of their track record but also for their community development approach and public participation plan. Not only do they have the ability to stabilize the DRC as soon as the City can approve a preliminary development agreement, but they also view the DRC in its fully restored state as maintaining public programming. The project encompasses the restoration of the two iconic historical buildings, the DRC and the City Club, and the development of 165 mixed-income residential units (for sale and rent) and both commercial and community facility space on the vacant block at Montgomery and Second Streets. Most importantly to the review team, the development plan proposes an extensive public planning process, where stakeholders in the neighborhood will work with the developer to determine the best and final uses in the project.

Please note for all responses, personal financial information has been redacted to comply with privacy laws