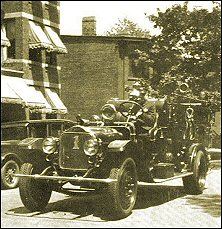 As early as 1915, editorials were calling for the establishment of a paid fire department to assure the response necessary for a densely populated and heavily commercial and industrial city like Newburgh. Beginning with drivers, tillermen and then officers, paid positions for full-time firemen were gradually created for each company. In 1934, the volunteer companies disbanded, and a professional department was instituted by resolution of the City Council.

In every one of the disasters and all the smaller crises of fires and gas leaks and hazardous conditions, the Newburgh Fire Department has always responded quickly and selflessly earning the city a strong insurance rating and reputation and providing its citizens a sure sense of protection.

Protection has a cost. Eight men have perished in the line of duty during the department's history: