Newburgh's Fire Department is one of the oldest chartered departments in New York State being established by an act of the young state legislature on March 24, 1797. It held its first organizational meeting of the five citizen-elected fire department trustees on September 11, 1797.

Serious fires in commercial buildings and in homes during the 1790s culminated in a call for better protection when the original Newburgh Academy nearly burned down in 1795. Only the united efforts of citizens that day saved the school, and those citizens formed a coordinated bucket brigade thereafter. 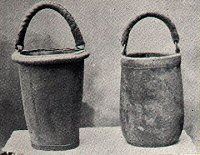 Each household was assigned by local law a number of buckets to fill and contribute to the "engine" (the community's first fire truck, a tank wagon which they purchased together). By local ordinance, men in each household were required to run with their families' buckets to the fire scene and women to put buckets out on the sidewalks where firemen dashed by and gathered them up.

There was seldom a lack of helpers at a fire in the 18th century, and citizen bucket lines often ran from the river uphill to the fire scene. It was not uncommon to see women working in the lines as well. A firehouse was built for this bucket engine on Eight-Rod Road, later called Western Avenue and then Broadway. Interestingly, the earliest of the old fire houses still standing (Brewster Hook and Ladder, 1862) is in the same lower Broadway location.