History of Our Police Patch

The official shoulder patch of the City of Newburgh Police Department is an original design, and it was added to the dark-navy blue uniform shirts worn by all sworn members of the Department in the early 1960-s. It is basically a color rendition of our patrol officer's shield, and although it has evolved slightly over the years due to advances in patch-making technology, it still resembles the original. This patch is worn on the left sleeve of all garments.

Officers also wore custom brass buttons depicting Washington's Headquarters on their uniform shirts until 1975. During the Vietnam Conflict a U.S. Flag patch was added to the right sleeve in honor of soldiers serving overseas, and it remains to this day. Many past as well as current officers have served in various branches of the United States Armed Forces during times of conflict. 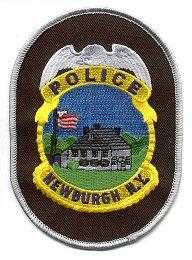